TIME FOR US by Fabien Prioville | The American Premiere

Back in Atlanta for a second collaboration with Tanz Farm, French Choreographer Fabien Prioville presented his new piece entitled “Time for Us” as part of France-Atlanta 2015.

Celebrated dancer and choreographer Fabien Prioville is known for his thought-provoking dances, born from imaginative views on social and interpersonal issues. In their first collaborative production, Prioville and his wife and dance partner Asuza Seyama describe what unites and divides them, confronting each other’s history as well as their own through the legacy of their teacher and mentor, the legendary German choreographer and dancer Pina Bausch (founder of Tanztheater Wuppertal).

Deeply influenced by Bausch and her virtuosic choreographies – and connected through their relationship and mutual work – Prioville and Seyama focus on the experience of two people meeting each other, in an exploration of time and space. More than a desire to stage a personal relationship between two people, “A Time for Us” is an invitation to question the dancers’ artistic references and identities. How do we meet? Where do we come from? What connects us? Is it possible to perform and move away from a legacy without dismissing it?

Presented by Tanz Farm and curated by Lauri Stallings & Anthony Harper, three performances were given on October 29, 30 and 31 at the Goat Farm Arts Center. Fabien Prioville also conducted a workshop entitled SHOP.

“TIME FOR US” by Fabien Prioville Dance Company 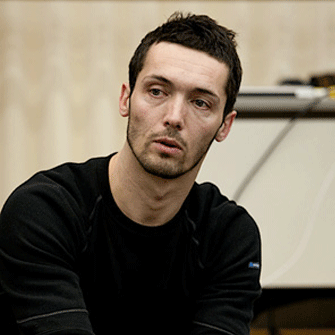 Fabien Prioville graduated from the Centre National de Danse Contemporaine (CNDC) in Angers, France. Following this, he worked with Édouard Lock and his company “La La La Human Steps” in Canada, before joining Philippe Blanchard in Sweden. In 1999, he became a member of Pina Bausch´s Tanztheater Wuppertal. He has been working as a freelance dancer and choreographer since 2006 and had had various commissioned works which brought him to New York’s Juilliard School, Australia and Japan over the years (e.g. “SOMA”). Since then, Prioville has created six major productions (For more information, please visit Fabien Prioville Dance Company):

Jailbreak Mind (2009)
What kind of process is a person running amok going through right before s/he is going to kill someone?

NOUS (2011)
The performance is devoted to the topics of territories and frontiers.

Experiment on Chatting Bodies (2012)
Virtuality as a playground for self-presentation: Fabien Prioville is fascinated by the influence of new technology on individual communication.

The Smartphone Project (2013)
A performance on augmented and mixed reality in co-production with Tanzhaus NRW & Ballet National de Marseille.

Reverse_Me (2014)
Commissioned by the Goethe Institute and developed during a six-week residency.

“Time for Us” (2014)
A duet by Fabien Prioville and his wife Azusa Seyama.

This France-Atlanta event was presented with the generous support of our partners and sponsors: