Human Landscapes | A Collaborative Dance Premiere – France-Atlanta – Together Towards Innovation

Core Performance Company and France-based choreographer Germana Civera present the world premiere of a new collaborative piece as part of the 8th edition of France-Atlanta.

Performed to an original score by Didier Aschour, Director of the Centre for Musical Creation in Albi, France, “Human Landscapes” is an embodied reflexion on history, memory, travel, encounters, the migration of beings, gestures and stories. Choreographer Germana Civera draws on her family’s own years in exile during the Spanish Civil War to create a multi-sensory performance in which the audience moves throughout the venue, following eight dancers on a migrant journey.

In an age marked by global dispersion and displacement, “Human Landscapes” seeks to address the physical and mental forms of alienation that unite all migrant subjects, regardless of era, culture and circumstances. It focuses on the stories and discourses of migration, the imaginary and poetics of migration and the transmission of exile experiences through history, memory, music, landscapes and choreography. 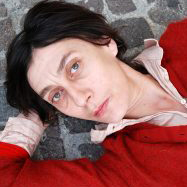 Trained at the Institut del Teatre in Barcelona and based in Montpellier, Germana Civera is a polymorphic artist; she has been working on questions of the body and its representation in contemporary dance for 20 years. In 2000, she founded the multidisciplinary Association Inesperada and began her tenure as its artistic director. Internationally renowned, Civera has staged productions for Festival International riocenacontemporanea (Brazil), La Porta (Barcelona), Le Centre Georges Pompidou (Paris), The Rawabet space for Performing Arts (Cairo), and Festival Transamériques FTA (Montréal). She has completed residencies with the Villa Médici (Rome) and the French Institute in Barcelona and is the recipient of The Excellence Award of Barcelona for her experimental performance-chorus piece FUERO(n).

Composer and guitarist Didier Aschour is a graduate of the prestigious Conservatoire National supérieur de musique in Paris and the Director of the Center for Musical Creation in Albi, France. In 1996, he founded DEDALUS, an ensemble devoted to free instrumentation and contemporary experimental music, and continues to serve as its artistic director. He has composed extensively for dance artists (Mathilde Monnier, Germana Civera, Patrice Barthès, Fabrice Ramalingom) and visual artists and filmmakers (Agnès Varda, Hervé Nisic, A.strid, Gwenola Wagon). He has been recognized by the International Yehudi Menuhin foundation (1992) and is the recipient of the 1994 Ferienkurse für Neue Musik de Darmstadt scholarship and the 2012 French Institute’s Hors les Murs residency in New York.

FUSED: French-US Exchange in Dance, a program of the New England Foundation for the Arts’ National Dance Project, the Cultural Services of the French Embassy in the United States, and FACE Foundation, with lead funding from the Doris Duke Charitable Foundation, the Florence Gould Foundation, and the French Ministry of Culture and Communication.