One of the few contemporary filmmakers from Sub-Saharan Africa to have reached international recognition, Abderrahmane Sissako has received worlwide acclaim for his portrayal of life under the threat of Islamic radicalism in TIMBUKTU. The highest-grossing African film to open in France and in the US, the 2014 drama has received a multitude of awards including a Nomination at the 2015 Academy Awards for Best Foreign Language Film and 7 Césars Awards from the French Film Academy. A very special guest of the 6th edition of France-Atlanta, Abderrahmane Sissako participated in a two-day event in Atlanta focusing on his work.

***
Before immigrating to Europe, 17 year-old Abdallah travels to the coastal city of Nouadhibou, in Mauritania, to visit his mother. Unable to speak the local language, the young man finds himself a stranger in his own country. As he gradually becomes involved in the lives of the inhabitants of this strange and unfamiliar place, Abdallah grows to feel a sense of loss for the life he is leaving behind.

This event is part of a collaboration with Emory University and The Willson Center for Humanities and the Arts at UGA. Student workshops will take place at 2:30pm at Emory University and at 5:00pm at SCADshow prior to the screening (for more information about attending the workshops, please send us an email).

***FREE EVENT / REGISTRATION REQUIRED – TO REGISTER FOR THIS EVENT, PLEASE CLICK ON THIS LINK.*** 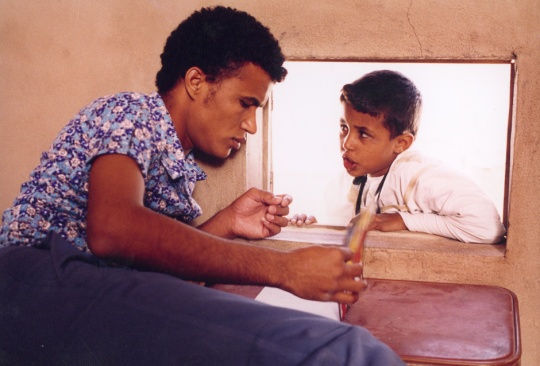 SYNOPSIS: In the legendary Malian city, recently fallen into the hands of Islamist militant group Ansar Dine, the villagers’ daily lives have become a constant struggle against the newly imposed theocratic state and its deadly partisans. Subjected to a fanatical regime imposed by Jihadists, the local people live in terror, enslaved by aggressors intent on controlling their faith, while banning harmless pleasures like music, laughter, cigarettes, even soccer. In the midst of lashings and stonings for adultery, absurd sentences are issued every day by the new improvised courts and carried out against the people. Away from the city, Kidane – a herdsman – his wife, Satima and their 12-year-old daughter Toya live relatively unaffected by the turmoil taking place in the city. Their destiny takes an unexpected turn when Kidane accidently kills the man who slaughtered their beloved cow “GPS”. Between despair and hope, he now has to face the new laws of the foreign occupation…

Following the screening of TIMBUKTU, Mr. Abderrahmane Sissako will speak with writer and film critic Tambay Obenson during a special talkback (Q&A session with the audience to follow).

This event was organized in partnership with the 6th Annual BronzeLens Film Festival, The Woodruff Arts Center and the Alliance Française of Atlanta.

Abderrahmane Sissako (born in 1961 in Kiffa, Mauritania) was raised in his father’s homeland of Mali. In 1980 he rejoined his mother in Nouakchott, Mauritania. A scholarship to study Russian literature enabled him to attend the Institute of the University of Moscow and later, to enroll in Moscow’s Institute for Cinema (VGIK), where he studied from 1983 to 1989. His desire to become a filmmaker stemmed from early childhood experiences – his separation from his half brother and Malian childhood friends and the loss of his original Bambara language.

His first short film, Le Jeu (1989), presented as a graduation assignment and poorly received by a school jury, eventually went on to receive great acclaim. Two years later, he shot his second  short-film, October, which was screened at the Festival de Cannes in 1993 and won the “Un Certain Regard” Prize. Sissako settled in France in the 1990s and continued to pursue filmmaking, working in a complex philosophical style that combines personal essay, autobiography, allegory, and drama to explore identity, displacement, and the cultural and economic effects of colonialism in contemporary Africa.

Since rising to prominence in 2002 with the contemplative Waiting for Happiness, his work– addressing globalization, identity politics and now, most controversially, Islamic radicalism – has offered serious narratives about the realities facing Africa today and is imbued with humanism and social consciousness.

These events were made possible thanks to the support and participation of our partners: